Ok, so you in my evening post last night that I was going to make my first cheesecake using my mom’s amazing recipe.  Well, instead of making one large cheesecake I thought it would be a great idea to make smaller cupcake size cheesecakes.  I knew that I would need to adjust the time, but for some reason just decided to cut the times in half without doing any research…what a bad decision.

The result was burned cheese cakes that stuck to the cupcake liners and had the graham cracker crusts separating from the cheesecake part…not good! 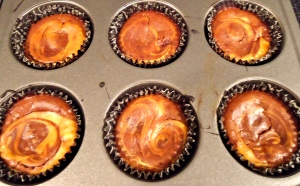 The cheesecakes should not be yellow like that…trust me.

Because of this failed attempt, I called my mom frantically to make a plan of action:

After work, I headed immediately to the store to purchase the new ingredients and got to work in the kitchen.  The mini cheesecakes are actually chilling in the refrigerator right now, so I am still not 100% sure if they have turned out.  The last thing I have to do is probably going to be the hardest…get them out of the pan!  I know that this recipe works as a large cheesecake because my mom has made it several times…it is her signature cheesecake dish!
Marble Cheesecake
Ingredients or graham cracker crust:
Preparation for graham cracker crust:
The best way to make graham cracker crumbs is to smash them with a rolling pin. 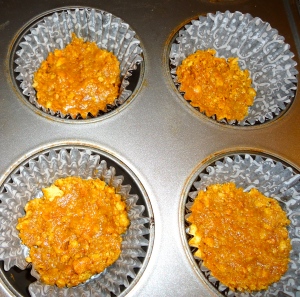 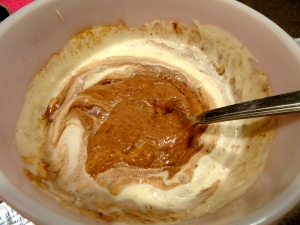 Spoon plain and chocolate mixtures alternately into crust, end with dollops of chocolate on top.  Gently swirl with knife for marble effect. 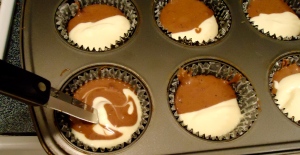 Bake at 450 degrees for 10 minutes.  Without opening the oven door decrease the temperature to 250 degrees and bake 30 minutes.  Turn off oven and let the cheesecake remain another 30 minutes without opening the door.  Remove from the oven.  Loosen cake from sides of pan, cool and chill before serving.
I’ll let you know how the second batch turns out…I have to go get them ready for our little party now…wish me luck!!!
What have you baked and failed at??