Apples to Apples and Congrats to My Sister!

Last night, Brian and I headed out to a little area in Indianapolis called Broad Ripple that has a ton of cute restaurants, bars, and shops.  We met our friends there for a drink to celebrate Jenni’s, a good friend from Butler and one of my sorority sisters, birthday.  They had rented the game Apples to Apples for us to play and we had a blast!!!

I haven’t played that game in so long, but once we started I remembered that I like to look at the green cards that I have won and think of them as describing my personality.  Last night for the longest time my two cards were “harmful” and “corrupt”…I would like to think those are not true personality traits for me!

It is always great to see friends that I haven’t seen in a while!

This morning, I had another bowl of buckwheat!

Today’s bowl was a mixture of:

It was sooo creamy and tasty.  This bowl will definitely be appearing again.
Workout
My knee started to hurt a little baby bit last night, so I decided that I was not even going to try anything today when it comes to working out and my knee especially since I have to work tonight.  I opted to make today more of a rest day in hopes that tomorrow I can get back in the groove my completing a short ab and arms workout.
Not the usual sweaty routine that I thrive for in the morning, but better than nothing!
Brenna’s Graduation!
Today, my sister graduates officially from Paul Mitchell School of Hair and Design.  She completed her hours about a month ago, passed her state boards exam a couple of weeks ago, and now is able to have her final ceremony!
Here are some sibling pics in honor of Brenna’s special day. 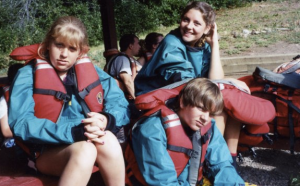 This picture is an oldie!

Weird Habit
For Brenna’s graduation, we are going to lunch as a little celebration.  Me being the planner that I am, I have a weird habit of needing to know where we are going out to eat so that I can look at the menu and nutritionals online before we even get there.  I am so indecisive that I often still have no idea of what I am getting when we arrive to the restaurant, but I still “need” to know beforehand where we are going….is that weird?
Do you like to look up the menu and/or the nutritional data before you head out to eat???